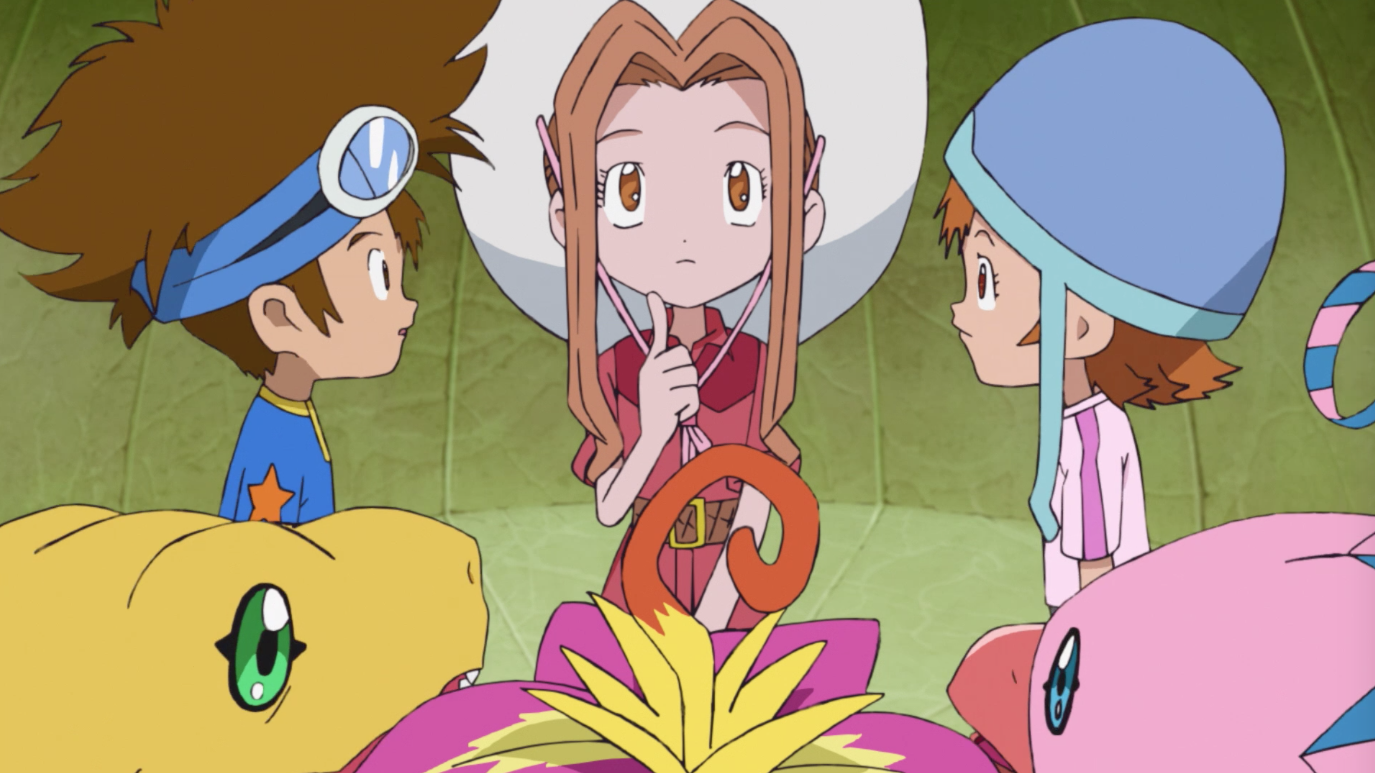 Digimon Adventure Colon has shaken up the Digimon Adventure formula in lots of exciting and controversial ways, but one of the smartest structural tweaks of this reboot is the gradual introduction of its core cast. By introducing each character one at a time, the show avoids overwhelming new viewers (I’m looking at you, Adventure Classic’s twenty-one different main characters designs in episode 1), while also providing the perfect carrot-on-a-stick lure to keep old fans engaged as they eagerly anticipate the introduction of their favorite character. Last week we got an exciting glimpse into the future of the season, but this week it’s time to put Mimi Tachikawa to the test and see if she’s made of carrot cake after all.

We pick up with Taichi and Sora clueless on how to find the Cloud Continent, until they’re interrupted by stereotypical anime stomach growls. Searching for food leads them into Mimi and Palmon’s trap, who accuse them of being giant tusked dinosaurs and then are quickly befriended once they realize that humans don’t have tusks1. The kids confer in Queen Mimi’s royal tent and tune in to Koshiro’s weekly news recap show (he’s handling his quarantine in The Network better than John Oliver, imo).

After seeing video footage of her grandfather doing his best to protect Tokyo, Mimi is inspired to protect the Tanemon village and formally inducts Taichi and Sora into her kingdom. To celebrate Ghost of Tsushima’s release, the samurai kids help defend the local village from evil bandits. Also, just like every great Kurosawa film, the battle turns around once a giant cactus wins a boxing match against a giant mole with a drill. With the day’s battle won but the ultimate problem entirely unresolved, Mimi deludes herself into thinking a single individual victory will have any meaningful impact on systemic change and decides to leave her kingdom undefended so she can star in a TV show.

This episode had a lot to live up to. Like I mentioned in the opening, the intro arc of this reboot is structured around delaying the introduction of iconic characters. So once they finally are dropped in the pool, they really need to make a big splash. And how big a splash did Mimi make? I personally found it a little underwhelming. I expected Mimi to make a loud, bombastic entrance full of iconic moments; instead we got a relatively tame introduction with at most a single line here or there that feel iconic, but only if observed through a magnifying glass scouring for Mimi content.

It’s still early days, but one big component of this reboot that’s starting to worry me is the ideological divide between marketability and memorability. There were already signs early on — the OP focusing almost entirely on Taichi felt like the series might be prioritizing a single mascot character over a rich, complex ensemble cast. Large shonen marketing powerhouses like One Piece and Dragon Ball certainly feature large casts, but they also are much more synonymous with their main character than the original Digimon Adventure ever was.

On its own, a more focused central character was fine; if we have to give more spotlight to Taichi for the series to reach new heights, sure, I’ll accept that. But these early episodes focusing on Sora, Koshiro, and Mimi are starting to feel like the characters this time around have been polished a bit too much. Like their rough edges and annoying quirks have been smoothed away to make them more focus-test-able marketing vehicles. I want a Mimi whose extreme bossiness ruffles everyone’s feathers but eventually grows into a gay icon two decades later, not a Mimi that is scientifically engineered and optimized for selling the most toys while the show is airing. But we’re only roughly 10% of the way into this series, so hopefully this fear will prove to be unfounded and we’ll get to see more sides of these characters.

The animation quality this week was pretty solid — pretty average fare for most of the show and then a couple short bursts of lavish detail during battle sequences. I think this is about the best we can expect the show to deliver on a regular basis, and hopefully standard episodes follow this mold more often than the disappointing mold of episode 4. I also hope that the show dips back into the “non-stop sakuga” quality of the first 3 episode for big pivotal episodes. On the flip side, this episode’s lavish bursts fell at the feet of basically every Digimon present other than Birdramon. Either the animators really really hate animating Birdramon’s design specifically, or the show is structurally dedicated to treating Sora as the least loved child.

In the end, as much as I fault this episode for not living up to the potential promised by Mimi, even middling Mimi content is better than no Mimi content.