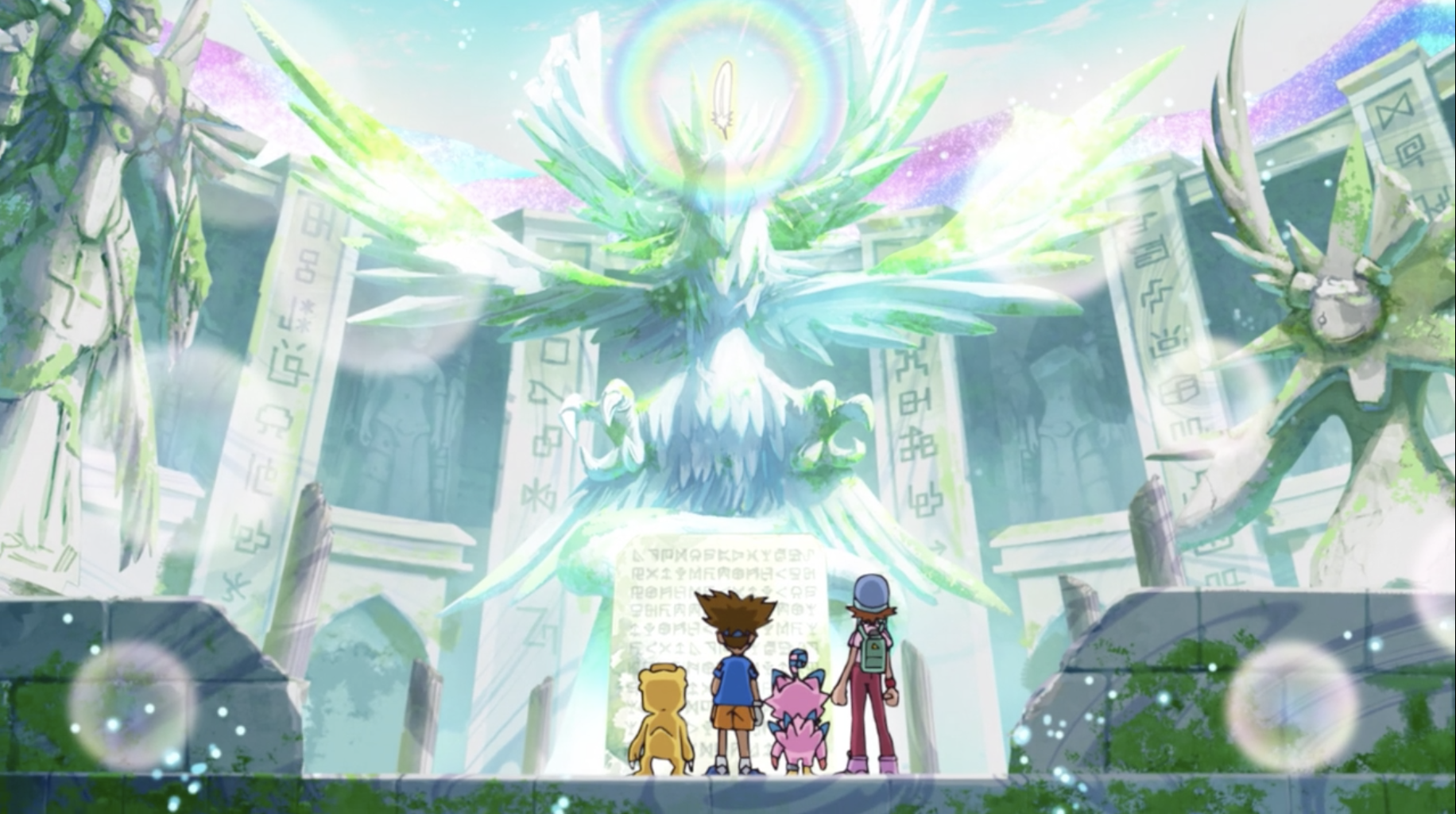 I’ve been a little worried about Digimon Adventure:. The first episode made a dazzling first impression and loudly declared that this reboot would not be a cheap or lazy cash grab — but every episode since has been just a bit less dazzling than the one before it. I’ve enjoyed every episode, but it was getting hard to deny the obvious pattern recognition that was setting in. Fortunately, episode 5 has arrived, loudly put a stake in the ground, and handed me a giant feather full of hope for the series. The future of Digimon Adventure: is bright.

The episode opens with Taichi and Sora recently landed at Gay Infinity Mountain, and Koshiro all set up for his upside-down info-dump Zoom call on a bench1 in Whamon’s digestive track. Holy Big Bird2 explains how a group of Seven Holy Digimon and Six Brave Warriors fought an ancient battle against the forces of darkness. Darkness was defeated, but the devastation in its wake left the physical land ravaged, the brave warriors destroyed, and Big Bird (and presumably others from the Holy Digimon) on the edge of life, with just enough power to serve as a VR-projecting tour guide. In their final moments, Big Bird foresaw how the bond between human children and Digimon could exceed the laws of evolution that govern Digimon, so they enacted a plan for the six warriors to be reborn once chosen children appeared in the world to guide them.

That info dump is the main thing I want to talk about in this review, so I’ll briefly run through everything else so I can get back to it. Ogremon shows up with a swarm of Dokugumon to interrupt Big Bird’s story time, and a school of Tylomon show up to ruin Koshiro’s Whamon cruise. Kabuterimon makes his debut with a pretty good transformation sequence that dips deep into the uncanny valley, Greymon gets his ultra-fancy stock evolution sequence again, and Birdramon is sandwiched between the two by transforming within a cloud of smoke. Birdramon’s entrance is actually staged and directed in a way that feels pretty exciting, but Kabuterimon and Greymon both get really cool energy beam shots this episode that make Birdramon’s animation sad in comparison. At this point all the clever staging in the world isn’t going to make up for how frustrating it is if Sora and the other girls are going to repeatedly get the short shrift. The kids defeat the bat-wing musical notes controlling the Digimon swarms, Ogremon reports back to Devimon, and we get a brief glimpse at Palmon and the first Digimon Queen.

Now let’s get back to Big Bird’s info dump. First off, everything about this scenario gave me huge Breath of the Wild vibes — our heroes re-awoken in a peaceful land full of scars and ruins from the ancient war. The only thing that’s missing is a badass princess single-handedly fighting to keep the evil power at bay for 100 years3. This scenario does have some similarities to the backstory of Digimon Frontier, but I don’t think that’s necessarily a bad thing; this reboot has shown so much promise in cherry-picking the strengths of several different Digimon entries. Frontier’s backstory had some pretty strong weaknesses4, but it added a richness to the show that I really appreciated, and I’m hopeful that Adventure Colon can avoid those weaknesses.

Adventure Classic took an extremely vague approach to world-building; every arc felt like it introduced just enough about the world for the story needed just in that moment. Only after Devimon is defeated do we hear about another, bigger threat; only after Etemon is defeated do we hear about another, bigger thr— and so on. The philosophy of keeping things vague and filling in details later can work well in some stories5, but in Adventure’s case it made the narrative feel awkwardly stitched together and disjointed. Even when Adventure’s final arc and background lore tried to glue some of those disjointed pieces together (e.g., by claiming that Apocalymon created each arc’s villain), it still left the world open and vague enough that Adventure 02 could introduce the concept of the Digital World being run by four Sovereigns who left absolutely no footprints in the first season6. Each of these disjointed bridges of logic can be traversed with enough mental gymnastics (ok, sovereigns were imprisoned by the Dark Masters and couldn’t impact anything during Adventure), but at its core there are reasons why those last-minute inclusions felt disconnected in the first place, and eventually those gymnastics start to get pretty tiring. We are a long ways away from knowing if or how Adventure Colon would ever handle a sequel season, but at the very least the early focus on backstory and lore indicates that the show is headed in the direction of a much less disjointed season-wide narrative.

When Leomon sits the kids down in Adventure Classic’ to reveal that they’re the DigiDestined (/Chosen Children), he’s just conveying the words of an ancient prophecy. Prophecies are a fun dramatic tool; they foreshadow future events, raise dramatic stakes, and in some cases provide a fun mystery for the audience to try solving on their own. But it takes a lot of clever work to write a plausible origin for a prophecy, and it’s much easier to just introduce a prophecy for a quick one-off reason without thinking about the who, how, or why of it—or by just using “magic” as an answer to all three. The more prophecies are used without that legwork, the more they just feel like a shallow, cheap trick. Adventure did everything right with that big prophecy; in the end, we know that Gennai and Homeostasis’ agents did the actual choosing after an attack from the Dark Masters, so they could have plausibly written Leomon’s prophecy. Unfortunately, Adventure also regularly used cheap trick prophecies, many of which were quickly carted out just to build up tension in a single episode (Devimon’s prophecy of being defeated by the smallest child, the prophecy of Myotismon’s revival and defeat, the prophecy of Apocalymon’s arrival, etc.).

With all that in mind, this is usually the point in Digimon where we maybe first hear a prophecy, not where we actually meet the agent behind it. So off the bat this whole encounter felt like an attempt to subvert our expectations. But it also kind of bypassed a prophecy altogether. Instead of a vague calling to the save the world, and 35 episodes of wondering who paid the phone bill for that call, we cut right to the chase and see who orchestrated things right in episode 5. You could even argue that Homeostasis isn’t fully revealed until Adventure tri chapter 3, which means that, in some ways, this episode cut right to things that took the original series 18 years to explain. I think this is great for the old school fans—it subverts our expectations and rushes past the stuff that would only be a rehash of something we’ve already seen before.

In many ways, it’s obvious that this is not the full reveal. For as much as this episode revealed, it also raised lots of questions. Big Bird only ever explicitly states that they themselves were defeated in the battle; how many of the other holy Digimon are alive? Why were these 6 children in particular chosen? Did the Holy Digimon actually doing to the choosing? Why is Big Bird’s voice an amalgamation of 2 voice actors — is it just for dramatic effect, or was that voice a combined entity of all the fallen Holy Digimon? How were the 6 digi-eggs prepared and staged so that they’d meet their partners? Who created the digivices and how do they aid evolution? How do the events of the mini Our War Game arc fit into all of this? It seems clear that all of these questions point to the existence of at least one active force out there guiding things, which I guess it should in an episode named after the search for just that Digimon. All of these questions feel more natural and logical than the questions posed by a standard prophecy, but no one of them feels urgently compelling. The most compelling mystery is on a meta-level — how are Takeru and Hikari going to factor into this? I’m excited to find out7.

There is one aspect of a prophecy that’s still alive, though, and I find it really fascinating. When explaining the boundless potential of children partnered with Digimon, Big Bird describes it as mysterious foresight that they saw in their final moments. Based on all of those rules I laid out before, I should hate this — it’s a vision of the future that has no who, how, or why beyond just “magic?”. But it’s vague enough that I think it works really well without all that. The big prophecy behind this series isn’t some epic, bombastic, tale about being chosen by destiny. Instead, it’s an optimistic vision about the boundless power of tearing down walls, embracing differences, and working together. We could all take a lesson from Big Bird’s prophecy.