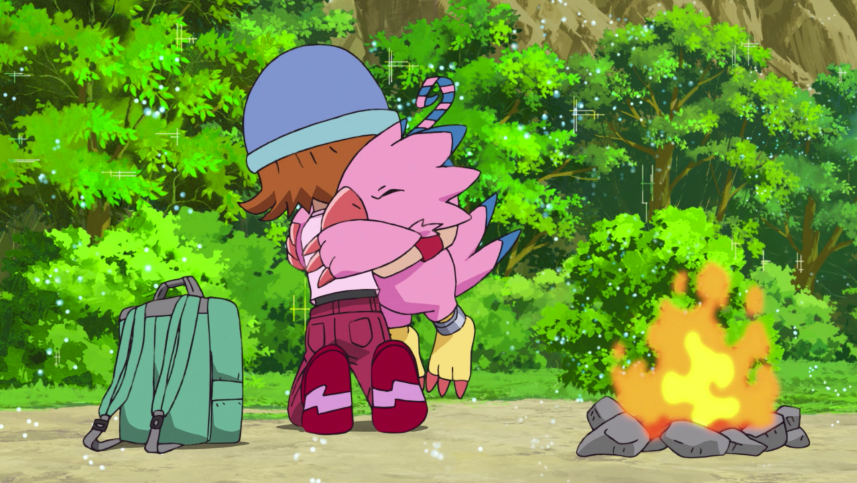 Recap: Taichi is disappointed to find out that Sora showed up for his Digital World date instead of Koshiro, and the two take advice from a stone tablet like they’re in a JRPG tutorial. Sora meets Piyomon, builds a raft, triggers Piyomon’s evolution into Birdramon, and, most importantly, is reunited with her iconic hat.

This week’s episode finds Digimon Adventure: at a highly anticipated crossroads. Once it became clear that the first couple episodes of the new series would be serving as a “Hikarigaoka but on steroids” inciting-event-slash-introduction-arc, it naturally left us all wondering how the show would be operating for its more standard, meat-and-potatoes episodes. And then the show went on indefinite hiatus due to COVID-19 in April, and left us all going “That appetizer was great! But what’s the main course?”.

How would series staples like evolution sequences and insert songs fit into things? What would the Digital World feel like? Would the intro arc’s flashy animation continue throughout the series? How would the show get us to care about minor villains and Adult/Champion evolutions after making a Super Ultimate look standard in episode 2? What would the show’s structure actually be, and how would it work with the 8-person ensemble cast? Well, 10 weeks later, the show is back from hiatus, and we have solid answers to… some of those questions!

We pick up this week in the immediate aftermath of episode 3’s cliffhanger — Taichi’s been sent to the Digital World along with Sora, but Koshiro somehow got stuck partway in the Network (don’t worry, he still found a bench to make his Zoom calls from!). We still don’t quite know what was up with the 2 different set of 3 lights getting sent to the Digital World at the end of last episode (was it 3 more kids getting sent somewhere else? or just the 3 Digimon partners for the 3 kids we saw this episode?), but the focus for now is solidly on Taichi and Sora. It seems pretty clear that this show is not going to jump head-first into the full ensemble cast, even now that we’re firmly in the Digital World and on a proper Adventure.

I enjoyed this introduction to Sora: she’s fun, brave, and adventurous. The best moment of the episode by far was Sora gleefully smiling while opening a giant knife as she revealed that the shopping bag she’d been clinging to all episode was actually emergency survival supplies that she just happened to be out buying. It’s a fun twist on gendered expectations that also tells us a lot about Sora’s character and makes her crucial to this adventure, which she almost never felt in the original show aside from one notable arc. That little bit with her survival gear did a lot to calm fears I’d had that this reboot’s focus on Taichi (and maybe on Yamato?) might end up pushing all 3 of the show’s female characters into the background and end up exacerbating the original show’s already not-great gender politics. The way that we’ve been slowly introduced to Taichi, Koshiro, Yamato, and now Sora also feels much more natural and dynamic than the original show’s early formulaic structure, where the camera just happened to focus more on a different character each episode.

But, on the other hand, it’s hard to not compare this episode to Sora’s first focus episode in the original show, and it’s not exactly a favorable comparison. In episode 4 of Adventure 99, Birdramon’s evolution resolves fairy large stakes (a village of cute plants is going to burn!!) and comes from big character moments for Sora, where we see early glimpses into her difficulty accepting love. Birdramon’s evolution in Adventure 2020, on the other hand, feels fairly lackluster. We also saw the introduction of Greymon’s stock evolution sequence in this episode, which was great (and retained a lot of the visceral, borderline-body-horror feel from his non-stock sequence in episode 1), but made Birdramon’s evolution sequence — basically just a claw poking through some flames — all the more bland in comparison.

Episode 4 of Adventure 99 was already 4-episodes deep into the Digital World, though, so it’s arguably not a fair comparison. This episode was more comparable to Adventure 99’s episode 2, where Agumon evolved to fight off a random threat without any larger consequences or heavy, introspective character development. I was disappointed that we didn’t really see any issues Sora was dealing with this episode, but we are still very early and have lots of time to see more. Maybe this newer dynamic plot structure means that character development won’t be so intricately tied to new evolutions; or maybe it’s just being saved for the 2 (or more) evolutions that she will unlock later in the season.

Overall, this was a solid episode. I like what we’ve seen of the Digital World. I like what we’ve seen of Sora’s characterization. But I wasn’t blown away by anything. Compared to opening episodes that were audacious enough to remake the franchise’s most cherished storyline, this feels like a solid bridge episode. I’m excited by the place the bridge is taking us to, but not by the bridge itself.