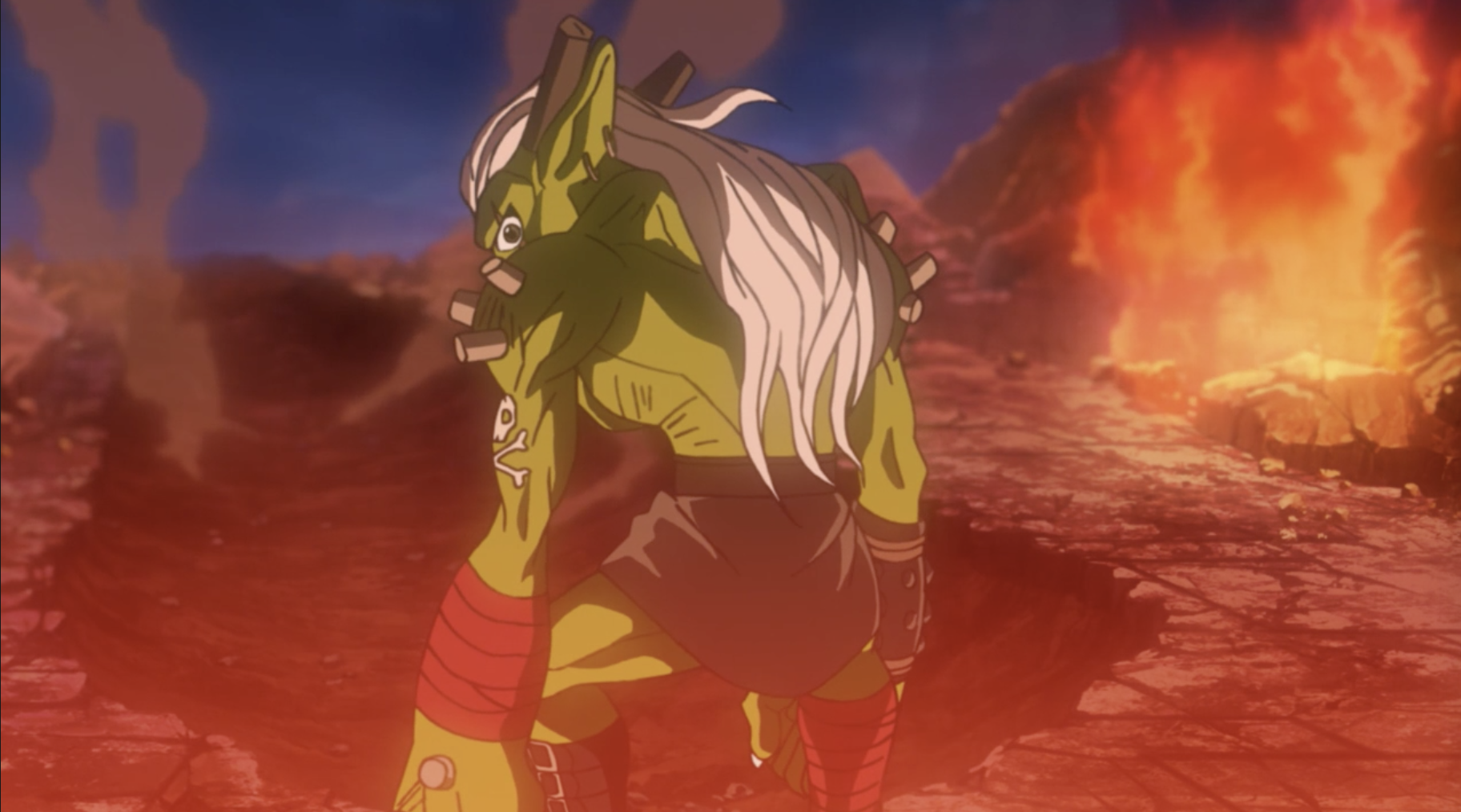 As we reach the point in Digimon Adventure 2020 where the original series introduced Devimon, flipped everything on its head, and really kicked things into (black) gear, there are 2 big elements missing from this new show that have had me worrying the past couple weeks: humor and villain characterization. Humor has slowly crept into the show’s formula in the past couple weeks, but enemies have continued to be flat, speechless roadblocks that get stomped without second thought. And then, speaking of enemies getting stomped without second thought, we got this week’s episode and my prayers for villain characterization were answered in spades, and in none of the ways that I expected.

After the kids struggle to interpret some awkwardly and ambiguously translated lore (we’ve all been there as Digimon fans), they notice Ogremon1 standing outside with a boombox demanding Agumon come down and return his affection. Ogremon and Greymon try to initiate their agni kai, but are interrupted by a swarm of Coredramon. Gabumon digivolves and does nothing, Piyomon doesn’t digivolve and does nothing, and then Kabuterimon arrives, makes a grand gesture, and de-evolves and, you guessed it, does nothing. Ogremon sends the Coredramon away and the epic showdown begins — at least until MetalTyrannomon shows up and steps on Ogremon. Before sacrificing himself, Ogremon gives the kids navigation directions in the most extra way imaginable.

I should start off by saying that I loved this episode. It wasn’t perfect by any means — relegating most of the cast to awkwardly standing around for 95% of the episode is frustrating at best, especially after last episode showed off how well this new series could juggle the (almost full) ensemble of kids. But this characterization of Ogremon felt fresh, original, and natural. It’s a pretty standard shonen trope for a villain to be redeemed after they fight and lose to a main character, but I really appreciate how Ogremon’s limited caveman speech meant that almost all of his transformation was conveyed through actions rather than words.

The scene of Ogremon turning away from MetalTyrannomon, punching to nowhere, and then turning his head and explaining that it’s the direction of the Holy Digimon sent chills down my spine. At that point, we totally expected Ogremon to be redeemed by the end, but it was such a well-written moment — by throwing us off our feet and making us confused about what Ogremon’s doing, the emotional impact when he reveals that he’s giving the kids a huge clue hits even harder. We’ll have to see how it fits into the context of the rest of the season, but so far I think I’ll remember that moment as the most impactful scene of this show’s first 9 episodes.

This episode frustrated a lot of fans, who felt like it was primarily a stalling episode where nothing happened. I see where those people are coming from, but for me Ogremon’s rich characterization this episode felt like plenty of meat on the bone (club). In contrast to the long, drawn-out multi-episode Dragon Ball Z-style fights this episode harkens back to, the most egregious of which were created to pad a single manga page (or even just a couple panels) of source material into an entire episode, this episode flipped a character on his head all while telling a complete, engaging story.

As much as this episode addressed the aspects of the show I felt were lacking, I still have lots of reasons to be concerned. We have a small number of data points, but it seems like the show is incapable of juggling 3 key components at the same time: humor, compelling villains, and a good balance of the full cast. Last week gave us a fun time with a large cast but no compelling villains, this week we got a compelling villain but at the expense of a cast of bystanders and only a single line of levity. It feels like the show is playing hot potato each week. Of those three factors, the one I care about the least is seeing the whole cast together, so I hope the show can find a way to split everyone up and keep things engaging as we appear to be moving into another round of evolutions.